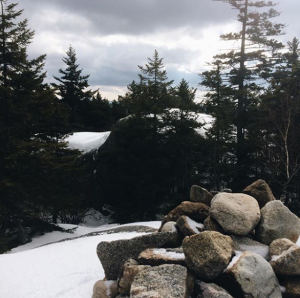 Plymouth Mountain was a spontaneous choice for my friend Mary and I. It doesn’t live on any hiking lists and I heard the views weren’t great, but we went for it anyways. The total distance was around 3 miles out and back. We began in the morning and Mary dawned snowshoes while I just went with microspikes. There was still a decent amount of snow around. We crossed a small stream and quickly came to a logging road junction. We continue up in elevation. It was a beautiful, clear day and I hoped we’d see some kind of view.

Time dragged on as the forest played tricks on us. After every small hill, we’d feel like we were near the summit only to find another hill behind the last. After what seemed like hours, we found a small spur trail that felt like it may have a view and boy did it. The view was not a large opening but showed the White Mountains to the north still capped with snow. We sat there for a while and enjoyed it. To feel as though we had actually completed the hike, we had to go searching for a summit. I was on the lookout for a cairn, geological reference, or sign. All we had found was a small cairn and I deemed that was enough. It was only after the hike that I discovered through some extra research there was a sign up there.