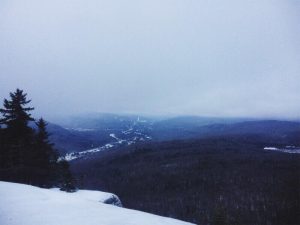 This hike is one of the earliest ones I’ve ever been on. For some strange reason, my friend and I decided to attempt a sunrise hike in winter. We left around 5:00AM and some small snowflakes began to fall as we made our way north. The trailhead for Mt. Pemigewasset (sometimes referred to as “Indian Head”) began at the Flume Gorge Visitors center. The parking lot was bare as we began our hike. The first step to the hike included trying to find the trail in the dark at 5:30 in the morning. With my $1 Walmart headlamp and microspikes on, we began our ascent. The trail began flat as we passed under I-93 and then began a gradual ascent through a dark and mysterious forest. I was too tired to think about the creatures that could be roaming the woods at this hour, instead I focused on the arduous task of moving my feet, one in front of the other.

The trail contained a few switchbacks and stream crossings while we made our way up. As we moved up in elevation, I observed the sky move from pitch black to lighter shades of gray. We summited before the sunrise and waited on the ice encrusted ledge that viewed south. I already knew that the gloomy shades of gray we were viewing were going to be our “sunrise”. The sky was overcast and the temperatures hung around freezing. I was sweating through my coat about halfway through our ascent, so now I dawned just my Led Zeppelin t-shirt. I sat and dangled my boots over the edge of the cliff and gazed out at the snow-covered trees below. It’s views like this that I love to send to my parents to give them a good scare.

Feeling a little disappointed with our lack of sunrise, we began our descent down. It took us only half of the time that it took us to make it up. We were back at the car around 8:00AM and began the drive home. I have a love/hate relationship with hikes this early. I love sleeping but I also love the fact that we had finished our hike before some people even began their day.