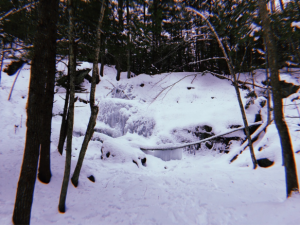 Last Saturday, the weather forecast looked bleak. New Hampshire was about to be slammed with a nor’easter and accumulations could reach 24″. That morning, my roommates and I decided to go snowshoeing at Rainbow Falls in Plymouth, NH. This trail is pretty popular and due to the lack of fresh powder, I opted for the use of microspikes instead of snowshoes. My roommates, Darcy and Teresa, still planned on using their snowshoes. Teresa was immediately interested in going but Darcy was apprehensive due to the fact she had made plans with her male counterpart. We estimated that it would take roughly two hours at most, due to the short trail length. Before we even got in the car, Darcy stated that she was in a rush and hopefully this won’t take long. We took Teresa’s blue prius through a snowy winding road to find that we had made it to the trailhead. I’ve been to the falls a couple of times, but never in winter. Once we arrived, I helped my roommates into their snowshoes and stretched my microspikes on to my hiking boots. The trail was nicely packed and we quickly found that the snowshoes were kind of overkill. My roommates bare booted and found that for the most part, this was enough. We made it to the falls and could hear the bubbling water below the vast layers of ice. I usually use the trail as an in and out but I looked at the map and saw that it could actually be a loop. We continued on past the falls and noticed that elevation gain picked up quite a bit. It seemed like hours and that the way that we were going was much longer. I kept checking the map but we were on the correct trail. Darcy started to get anxious and annoyed that we weren’t out of the woods; this made the atmosphere between us all tense. Based on the topographic lines, I could tell we were getting close. Teresa and I stopped to admire a tiny stream while Darcy continued on full-steam ahead. Once we could see the parking lot, the air seemed to lighten. She couldn’t wait to leave and honestly, I felt the same because this wasn’t the relaxing walk I wanted. The people that you bring with you on a hike or adventure can seriously impact your own experience. The nature was beautiful but the experience was not all of what I had hoped for.